The current navigation (based on Docusaurus, the same framework used by the original tutorial) requires a relatively large number of clicks, some of them being defaults like yellow marker 1. The example below requires click on how to label (marker 2), how to debug (marker 3), chrome devtools (marker 4) and finally example to select the first of many (that will be added soon) tutorial examples. This first example explains the concepts of building the app and running the app under control of Chrome’s built in debugger. 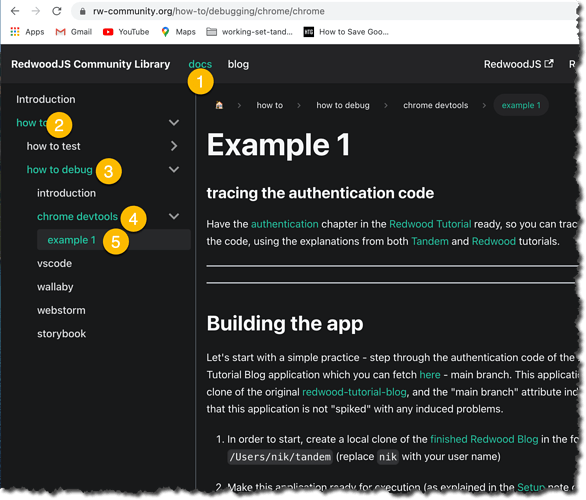 This unfinished navigation will have many examples in each folder (chrome devtools, vscode, wallaby, webstorm and storybook. The same issue is present in the how to test folder. So, we have two subfolders in the how to folders, each them having 5-6 (number of supported tools), and each of these sub-subfolders having n markdown articles describing all methods to test and debug

The current navigation method will fail unless with provide an intelligent search (the same as used by the current tutorial:

2. On examples of tutorial focus