I’m following the tutorial and have just been generating the scaffold for my Post model.

However, things aren’t working in the /posts page

Again, the API server does receive the request but times out.

Note that the IntrospectionQuery queries from GraphiQL, sent every 2 seconds or so, are correctly handled by the API server.

I’m not sure how I can debug this… help!

Hi @olance Sorry you’re having difficulty and hope we can get you sorted!

First off, I want to check if you’re using Firefox – there’s a known issue if so.

Otherwise, most of the time this issue is due to either code being incorrect or the database migration getting out of sync with code changes. Could you take a look at this comment (and thread if needed) and see if these steps help you get sorted?

If that doesn’t seem to help either, could you confirm your OS and version?

Thanks for the quick reply @thedavid!

Sorry I should have included browser & all… it was late

Unfortunately the Github issue/discussion did not help.
I tried deleting the sqlite db and generated migration, and running db save and db up again, but still getting the same result:

Given the logs from both the web and api process, I’d say it’s probably not a browser-related error, but rather something to do with GraphQL / the DB.
And given the fact that Graphiql manages to get a response to its IntrospectionQuery queries, I’d bet on the DB ^^

Also, it’s possible that my setup is not so clean; I have installed Node and Yarn a long time ago with different methods… I cleaned things up before installing Redwood, but who knows

I have pushed everything, in its current state, on Github: https://github.com/olance/redwood-blog-tutorial

Let me know if I can help debug this in any way!

Hi @olance Thank you for the link to your repo. Good news! I was able to get this running locally.

The problem seemed to be your db migration being out of sync with your code. But it’s possible something else got out of sync on your end between the db state, code state, and your modules. Could you try this:

Note: before these steps, make sure you have “git commit’ed” any file changes you want to keep

$ git clean -fxd
This will remove all files ignore by git or any file changes not committed (so node_modules and the local dev db). It’s like starting the package installation from scratch.

$ yarn rw db save
This creates a “snapshot” of your db schema, which you need to match your current schema.prisma

$ yarn rw db up
This applies the “snapshot” to your db, which in your case is the local dev db running sqlite

$ yarn rw dev
You should be ready to go! Head to /posts and let me know if it works

@rob yes it did work:

@thedavid Executed all the different steps and still no luck

As a side note, I followed the tutorial instructions to the letter and haven’t executed anything else than what was instructed.
So it must be a machine setup issue.

I’m gonna try again in a node Docker container, see how that works, and report back

I don’t get it

Within a Docker container, everything worked flawlessly.

I removed and reinstalled everything Node-related on my Mac, recreated the tutorial project from scratch, and it’s still hanging on the Graphql posts query

I’ve spent hours debugging deep into the API dev-server code, but can’t figure out what the hell is going on on my machine

The service code is called. The GraphQL query is executed. But when comes the time to getting values, things fail silently. 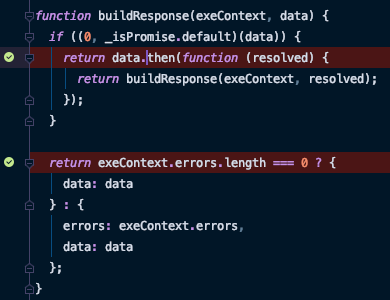 That’s where I get to (node_modules/graphql/execution/execute.js).

data is first a pending Promise, so the first breakpoint in the screenshot hits.
I’d expect the second breakpoint to hit soon afterwards, as the Promise resolves, but when I “continue” the code execution, it goes on without breaking there, and the error I’ve shown earlier appears in the server logs.

None of my attempts to console.log any error from a catch on the Promise worked/showed anything

I could still setup everything to work from within a Docker container, but I’d rather not… let me know if you’ve got any ideas!

I have successfully created a new working project on another computer. Copied the project over to my main one. It worked!

Then I deleted dev.db and node_modules, followed by the commands you gave me and … not working anymore!

So is Prisma generating something buggy in some way?

@olance First off, you’re a champion! I would have given up a long time ago. Thank you so much for hanging in there with us

And agreed this behavior is both frustrating and suspicious. Especially given the different types of setup testing you’ve attempted.

I’ve forked your reproduction repo and committed one change: I generated dev.db, confirmed it’s working, and added it to the repo. Could you:

If so, next step delete 1) prisma/migrations/ as well as 2) prisma/dev.db and repeat the steps:
yarn rw db save
yarn rw db up
yarn rw dev

First off, you’re a champion! I would have given up a long time ago. Thank you so much for hanging in there with us

Well, first I’m quite stubborn and don’t like to be defeated by a computer

And second, Redwood looks like what I’ve been waiting for in the JS world for like, forever (i.e. ~ Rails for JS). So yeah, hanging in there

I’ve forked your reproduction repo and committed one change: I generated dev.db , confirmed it’s working, and added it to the repo. Could you:

So I tried something else, and found that my intuition was correct!

So clearly, for some reason, Prisma does not generate a correct runtime on my machine.

What’s strange is that it’s a binary. I doubt they’re compiling it on the fly, rather than just fetching/copying the correct pre-built binary depending on the declared binaryTargets for photonjs?

You are an animal.

And hang in there 'cause I think we’re getting close!

This wouldn’t be the first time we’ve had a super strange issue with a Prisma2 binary:

This project looks great! I'm hoping to get a demo going with TinaCMS added to it for content editing. Unfortunately, running yarn...

Could you take the solution in that thread for a spin and report back? Also, looping in the Prisma team about this as well.

It was definitely the binary.
After some digging around in Prisma’s issues, I tried clearing its cache:

After that, removing node_modules (that a bit radical but… whatever ^^) and running yarn again reinstalled everything. yarn rw dev aaaaaand … it works!!

At first I was surprised to see things work because I did not believe I had actually deleted anything prisma-related in the cache folder (forgot to check for presence of the prisma dir…).
I reinstalled the Prisma packages to try and understand what part was downloaded, from where and when… and realized things were now working.

Now the funny part is: the content of ~/.cache/prisma/master/45bc4bb9bcdd5fd45ffd3bc2a1b42cd0d4a4ae0a/darwin/lastModified-query-engine is presumably the last modification date of the engine binary:

Too much of an early adopter, I guess

Just wow… And I owe you so many

I can only hope your work here will pay forward in pain avoidance for many others to come!

So most likely the binary was busted/corrupted from the beginning but stored in the cache.

I so hope for smooth travels from here out! And that you enjoy all the Redwood goodness that is working for you. But, ahem, just a heads up… we just updated to Prisma2 preview024 in ‘master’ branch. More “early adoption” adventures coming your way soon

Well, you know the saying…

There are only two hard things in Computer Science: cache invalidation and naming things.

Thanks for the continued support & suggestions throughout the resolution of the issue!
I’ve been able to continue the tutorial down to form creation… time to sleep for me, but I’m sure things will be much smoother now

There are only two hard things in Computer Science: cache invalidation and naming things.

Get some rest! You’ve earned it.

But, ahem, just a heads up… we just updated to Prisma2 preview024 in ‘master’ branch. More “early adoption” adventures coming your way soon

Thanks for fighting through this @olance. As written otherwise, you seem to be the third real world occurence of https://github.com/prisma/prisma2/issues/1819. Thanks so much for keeping at it, now we have a third person to ask if our fixes actually helped here, as this is super difficult to reproduce and understand

If someone lands here via Google because they have strange things going on with Prisma and SEGFAULTs (or invisible errors), this represents our current understanding of the situation and what we are doing to fix it: https://github.com/prisma/prisma2/issues/1819#issuecomment-603406808

@janpio I’m glad if that could help even a little!
I’m going to follow-up on the Github issue, hopefully you’ll get a better understanding of what’s going on!

I too have been getting intermittent errors of this nature:

When I do get the error the api logs shows:

I’m working in a 0.31 ts project with the Firebase auth integration