If you have used Storybook with Redwood, would you be willing to write a post on how to do that?

Also this Design-first Full-stack: RedwoodJS, Storybook, and Tailwind - YouTube should help you in understanding the cool redwood flow of building stuff.

P.S: is not really “Redwood flow” but you get the point.

No, @ajcwebdev I had never noticed that there was a part II of the tutorial !!

@thedavid – That should be our tutorial now !!

(it’s certainly going to be my commercial for introducing Redwood at work !!)

later: the more I use storybook the better the experience becomes, our Tutorial really needs to start with getting Storybook Running !!!

@thedavid would you post that video to the redwood you tube channel?

that way it’s referenced from the awesome-redwood (which needs to showcase that, imo) 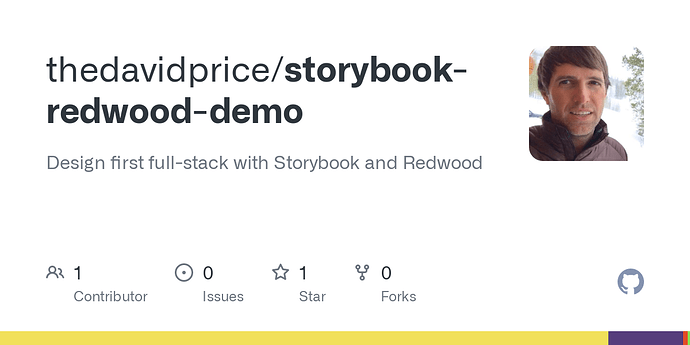 Good call, the awesome-redwood repo actually references videos from all over the place and not just the Redwood YouTube channel so I’ve added it here.

I just posted my comments to @thedavid’s storybook-redwood demo, insinuating the need for several tutorials on RedwoodJS using CMS as backends (Contentful, Joomla, Kajabi, Drupal and Strapi - this list could be smaller and larger, dependent on a quick poll we could set up).

I like @thedavid’s choice for the demo - with a proposal that instead of presenting the storybook team, we introduce the RedwoodJS core team and “deserving” contributors (showing storybook team to Contentful, Strapi, etc would not be politically correct