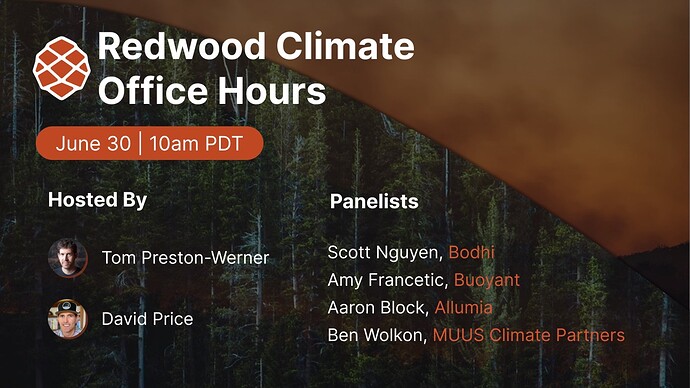 We are excited to announce that we will be hosting our first Redwood Climate Office Hours Event on June 30th!

This event is open to anyone who is interested in climate software startups. If you are a Redwood developer or entrepreneur who’s starting a climate company or would like to apply for the Redwood Startup Fund, this event is especially for you.

We hope to see you there! 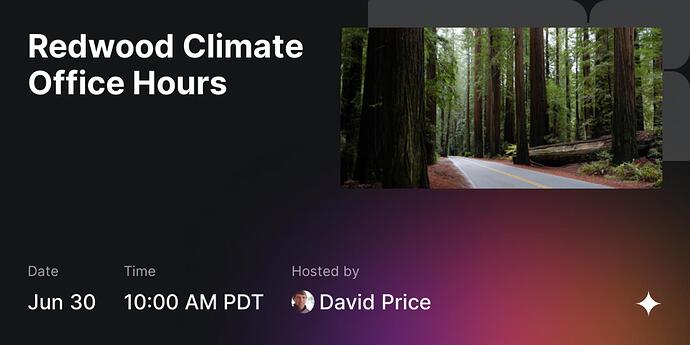 Welcome! We are hosting our first Redwood Climate Office Hours on Thursday, June 30th at 10:00-11:00 am PDT. Event Details This event is open for anyone who is interested in climate...

Meet our Hosts and Panelists

Tom Preston-Werner is cofounder of Preston-Werner Ventures. Tom started his first business, Gravatar, in 2003 and sold it to Automattic in 2007. Since then he’s created many open source projects that have changed the way developers work and are used in millions of open-and closed-source projects. Tom is also known for cofounding GitHub which was bought by Microsoft in 2018. Tom is currently the cofounder and Chief Product Officer at Chatterbug.
Tom’s Twitter

David Price is Developer in Residence at Preston-Werner Ventures, focusing on the alignment of innovation and human flourishing. He supports general initiative and Hypothesis projects with an eye towards technology ethics, team formation, and expansion of product benefits across stakeholders. David has experience across industries as a multi-disciplinary entrepreneur.
David’s Twitter

Amy Francetic is co-founder and Managing General Partner of Buoyant Ventures, a new venture fund in Chicago that invests in digital climate solutions for energy, transportation, agriculture, and the built environment. Her career spans over 20 years of high technology entrepreneurship, private equity, and research. Amy previously founded and led Energize Ventures, a $165mm venture fund that invests in digital energy technologies. She also co-founded and served as CEO of technology accelerator Evergreen Climate Innovations (formerly Clean Energy Trust,) which has invested in dozens of early-stage clean energy companies across the Midwestern US. She now serves as Chair of its Board of Directors. Amy also held roles at private equity firm MVC Capital, and at Stanford Research Institute where she worked on an early version of the voice recognition technology that became Siri. Earlier in her career, she was co-founder and CEO of a consumer technology company that was funded by Microsoft co-founder, Paul Allen, and that she sold to the Danish toy company, Lego Systems. Amy also helped fundraise for mobile gaming company, GluMobile, on whose board she served until it went public on the NASDAQ.
Amy’s Twitter

Aaron Block is Founder and CEO of Allumia. Aaron has dedicated himself to putting capital to work for the environment. In 2009, Aaron co-founded Skyline Innovations, helping grow it to the nation’s largest developer of solar water heating. He founded Allumia to provide energy efficiency in the simple, metered way that utilities provide electrons. Aaron is most proud that his work makes it profitable for businesses to reduce their environmental impact.
Aaron’s Twitter

Ben Wolkon is the Manager of Sustainable Investments at MUUS Asset Management Co., specializing in deal sourcing, due diligence, transactions, governance and operations for clean energy and technology companies, ranging from early stage startups to publicly listed corporations. Since joining MUUS in 2016, Ben has created an investment portfolio of companies that are playing a major role in decarbonizing the economy of the future. His areas of focus include solar energy, energy efficiency, fintech solutions for sustainability, energy access in developing countries, and next generation clean energy breakthroughs. Ben is part of the Climate Pathways Project, a collaboration between MUUS, MIT and Climate Interactive to bring groundbreaking climate change solutions simulation modeling to the highest levels of political and business leadership. The project has engaged approximately 100 US Governors, Senators and Members of Congress, as well as countless business leaders, with the En-ROADS model. Prior to joining MUUS, Ben worked as a commercial solar energy developer in Massachusetts and Rhode Island.
Ben’s Twitter

This event will be hosted on Zoom Webinar. Once registered, you’ll receive a link and calendar invite with the Zoom details. You’ll be able to view the live stream, participate by chat, and join the discussion by audio and/or video (audio or video are optional).

Day-of: How to access the Redwood Climate Office Hours Event

On the day of the event, you’ll access the Redwood Climate Office Hours Event via the Zoom details sent by email. You can also access event details from here.

For support resources to learn about intersections between software and climate entrepreneurship, refer to this document.

Will there be a recording?

@sokirill the recording is live:

Full event recap with links has been posted!

Thank you everyone who joined our Redwood Climate Office Hours on June 30th! Video Recording YouTube recording is here: [Climate Startup Office Hours June 2022] Topic Recap and Overview Redwood Climate Office Hours is for anyone who is interested in climate software startups. This event is especially for a Redwood developer or entrepreneur who is interested in starting a climate startup or would like to apply for the Redwood Startup Fund. Tom Preston-Werner, GitHub co founder,…