Hey all – last week I put together a mental mapping of Redwood concepts, tools, and “layers of the stack.” It’s incomplete (where do serverless functions fit?), but thought it might still be helpful given the conversation in today’s meetup: 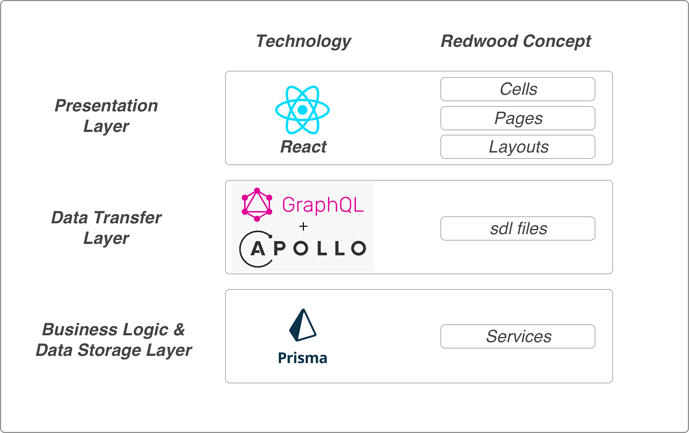 What do you think? Is this a helpful high-level overview? Anything foundational missing or not categorized correctly?

Nice! Thanks for this.

I love it Tim! That’s great

Scaffolding and redwood configuration of Apollo and prisma

Also I need to check this again but SDLs are orchestrated I believe by redwood directly. These ties are the thin hard kind to grasp to really ‘grok’ RW, in my humble opinion.

Thanks for taking the task though

Anything foundational missing or not categorized correctly?

I’m not sure what to call the layer that has Services in it, but within the api side … and I do think the concept of sides need to be used more in the diagrams because I think it’s an awesome way to “think about” how to coordinate common functionality and demonstrates that this functionality can be shared “across sides”. As the RW intro docs state:

You’ll notice that the web side is called “web” and not “frontend”. This is because Redwood conceives of a world where you may have other sides like “mobile”, “desktop”, “cli”, etc., all consuming the same GraphQL API and living in the same monorepo.

In that regard, I’d consider where to put other api side capabilities:

Can see that it gets interconnected really fast – and that’s what’s really nice and powerful about the architecture … even so early on in RW’s life.

@tctrautman Thanks again for this! Wanted to share links to docs I’ve found helpful as well: