In my experience, the feedback from novices should be very valuable for documentation writers, where the value of such feedback diminishes with novices gradually growing into “regular” app developers. I am not sure whether such practice (collecting feedback from novices) exists formally, so I will start recording my own issues.

1 standard lifecycle of features as you build a Redwood app

This workflow defined as

seems well composed and logical (at first glance). However the complexity of the project’s structure, even as simple as being built in the Tutorial sample (note that I cut this tree and place two halves next to each other) 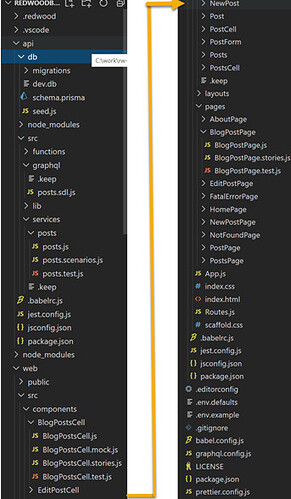 makes the “application of lifecycle of features” to that project tree quite difficult. Even postulating that my memory used to a lot better a long time ago, I am now trying to go through the first tutorial up to and including routing params, for the third time trying to see whether I have the lifecycle workflow memorized, so I can play it (association to a piano) without peeking into the tutorial text. Well, I am as far away from that as I was initially the first time.

I will continue repeating these workflow steps, until I learn how to play it “by ear”. I hope to develop some cheat sheets - and if I do, I will share that with other interested folks.

Note: I am doing these repetitive tasks, to be able to give as much feedback while I still know next to nothing about developing applications with the RedwoodJS framework.

In the VSCode terminal and:

I am not even close to claiming that the Tutorial is broken - but it could be that is insufficiently clear for my level of intelligence. To resolve this, I will be happy to learn from experienced RedwoodJS application developer all debugging “tricks” they use and then share all of these new learnings in the Redwood application debugging issues discussion that is still empty

To simplify this learning process I will put the current Tutorial code in my https://github.com/adriatic/rw-debugging repository (it is currently empty until a good soul appears to tech me a trick or two)

Hi @adriatic, I’d be willing to work on this section of the tutorial with you sometime if you’d like. Or, if you push your code so far to the repo, I’ll take a look and see if I can help! I’m not sure I know any debugging tricks, but one bug at a time, I think we can make progress together.

Hello, Forrest (@forresthayes) I am delighted with your response

I have a passion for creating world’s best documentation for newcomers (like I am here) - where Tutorials and Debugging issues are the two most important ones, by far. Logic tor such evaluation is simple: not having these two is the key reason for losing new customers, who came being attracted to the “RedwoodJS fame” and leave getting stuck in some Tutorial issues, without being able to use debugging to find out what happened.

My personal contribution to the Tutorials documents is a direct consequence that I am getting stuck left and right - and creating issues of the “not clear enough for an average developer” type. As I expect to finally graduate to the “solid student of the Tutorial” level, I will then lose the ability to catch all “unclear points”.

In a little while, I will refresh the existing content to include your participation and more precise definition of what we hope to achieve here.

A brief explanation - for @forresthayes and @thedavid mostly (and for future readers of this topic).

This topic was created with the intent to collect all debugging specific knowledge and future dreams from Redwood community members (core team as other developers alike). I plan to leave it (topic) open until a few years come by without any new comments

In addition, I created a similar topic Redwood application debugging issues which is a lot more ambitious since it is not focused on collecting ideas, but rather on creating real projects (design and implementation discussions and actual coding - by all people that express interest in that subject)

Lastly, I am also working on Windows Dev and Setup: Recommendations and Best Practices, initiated by @thedavid, who responded by my mild critic (who of you guys use Windows platform in a regular fashion). That work is still unfinished (it is “hidden” here) and it was the point where I was about to write the Debugging section in the Windows development context, that made me create the two above mentioned topics