Can I deploy to AWS GovCloud with serverless framework?

I want to begin by thanking you all for building such an incredible framework! I currently have an app in production which was deployed to AWS Commercial using serverless (so easy!).

With that being said, my company wants to move to AWS GovCloud, but GovCloud is not integrated in CloudFront and deploy serverless --first-run command fails in the second half (after API_URL is copied to env.production).

The error produced is:

It appears that the only way to manage this is to have our API and DB in GovCloud connected to a CloudFront instance hosted in AWS Commercial. 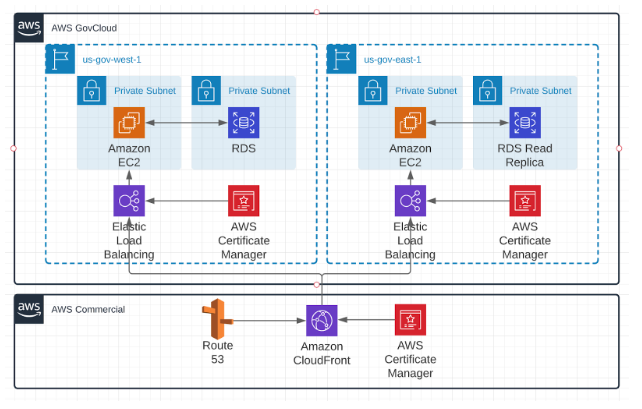 Obviously, this requires two sets of AWS keys, so I was wondering if this is something you plan to support in the future, or if there’s a better way to do it and I’m just missing something. Either way, I’d love to get your feedback. Thank you so much!

Hey @derekdevs, have you decided on a path forward?

We’ve been working on an alternative AWS deployment method for Redwood which might be able to help. It’s based on Pulumi + OpenFABR Cloud Development Framework.

Also curious why your diagram shows EC2 + ALB? given the Serverless default for RW I believe is API Gateway + Lambda for the backend.